Radioactive water spills into containment dome, yet there is no danger to the public, officials say.
http://sanclemente.patch.com/articles/operators-shut-down-san-onofre-one-reactor-unit-as-a-precaution#_= 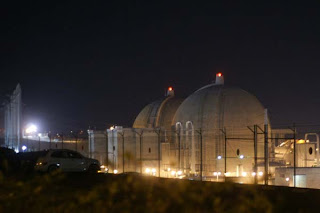 Here we go again. The public relations experts step up to reassure the public that all is well. Meanwhile, I get this message from a whistle-blower, " So much for installing brand new steam generators for 800 million. SCE is really down playing the seriousness of this."

Someday we will hear the sirens go off, and it won't be another false alarm. In fact, I sit here wondering if this may actually develop into the dreaded nuclear nightmare. Is this our Fukushima? If not, it is only a matter of time. We must understand that the protective measures that were once in place no longer exist. It is up to you and me, the people standing in harms way, to demand a shutdown of these unnecessary reactors that threaten the livelihood and well being of more than 8 million people, all for 7% of our energy.

Let's make them prove they are safe to operate and that they have addressed the lessons learned from Fukushima before we allow them to continue on the reckless path they are on. How many more warnings will we get? Do we really need a total meltdown in America in order to accept the reality that nuclear power is extremely dangerous? Are we the ones that are going to have to be sacrificed as the example that Americans can no longer ignore?

Unfortunately, I am beginning to believe that we won't take any serious steps to avoid a Fukushima-like event until it happens in our country. With all the warning signs, no one will be surprised when it does take place here. It is only a matter of time. San Onofre, with a safety record ten times worse than the industry norm, sitting next to a fault line exceeding the design basis for this nuclear power plant that is reaching its intended 40 year lifespan in 2013, is a very likely candidate for failure.

That is why we are planning an event to remember Fukushima on the upcoming anniversary. People need to remember the lessons that the Japanese are still enduring. The no-go zone in Japan is a 12.5 mile radius and it is estimated that it will take 40 years before it might be safe to return (if ever). The cost of cleanup is already in excess of $120 Billion.

Can you imagine that happening here? No use of the main freeway between LA and San Diego, a major military base rendered useless, thousands of homes and businesses that can't be insured against such a disaster, all the people left homeless and with very few possessions, for who knows how long. The financial disaster alone would be staggering, let alone the deaths and disease and environmental degradation that are more difficult to substantiate or quantify.

Just yesterday, I participated in a webinar with the Nuclear Regulatory Commission who wanted some public feedback on the proposition that we store highly radioactive waste on site for another two or three hundred years. What are these people charged with the public's safety thinking about other than what is best for the industry?

Let's move away from this outdated dangerous technology and replace it with safe and sustainable options that will lead us to a brighter future. We can live without it as seen in this very moment when no power is coming from San Onofre. It won't be nearly as bad as they make it out to be.

Please join the people's movement to shut down our nuclear power plant before it is too late. Go to http://sanonofresafety.org/, or send an email to gary@sanclementegreen.org to get involved, to do your part, because those that you think you can count on are not on your side. Stand with us. Go with the precautionary principle. There is too much at stake for too little in return. No Fukushimas here. We know better and so do you.