Nuclear reactors in the central and eastern U.S. face previously unrecognized threats from big earthquakes, the Nuclear Regulatory Commission said Tuesday. Experts said upgrading the plants to withstand more substantial earth movements would be costly and could force some to close.

Threat by Land and Sea

Dozens of nuclear reactors operate in earthquake-prone regions around the world. Among them, least 34 are in high-hazard areas; 17 of those are within a mile of a coastline. 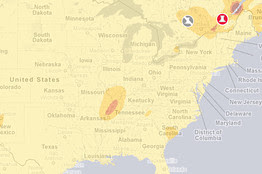 The NRC said it would require nuclear-plant operators to conduct new seismic studies for all 96 reactors in eastern and central states to determine if the plants could withstand the shaking predicted by the government's new seismic model.

Updating the U.S. survey of past seismic activity became urgent after a 9.0-magnitude earthquake and tsunami devastated northeastern Japan last March. The event overwhelmed the defenses of reactors at the Fukushima Daiichi site, causing widespread damage and radioactive releases. The earthquake exceeded the level for which the reactors had been designed, calling into question earlier seismic assessments.

The NRC plans to give nuclear-plant operators four years to re-evaluate risks by running complex calculations for all structures, systems and components. By law, nuclear plants must be able to withstand earthquakes "without functional impairment of those features necessary to shut down the reactor, maintain the station in safe condition and prevent undue risk to the health and safety of the public."

The seismic study "is an important piece of work but it doesn't tell us what needs to be done," said Alex Marion, vice president for nuclear operations at the Nuclear Energy Institute, a trade organization. "The model will need to be applied to specific sites and that will take awhile."

Critics said regulators are moving too slowly. "The NRC does not need a new model—it needs a spine," said Dave Lochbaum, director of nuclear safety for the Union of Concerned Scientists in Chattanooga, Tenn. The NRC already has sufficient evidence to require immediate upgrades to dozens of plants, he said, adding that further delay amounts to a "bureaucratic stall tactic."

The NRC has said it needs more information before requiring upgrades. NRC spokesman Scott Burnell said it was possible "that operators will do the analyses and say, 'Our existing safety margin covers it, so no upgrades are needed.' We just don't know yet."

Any required retrofits could be expensive. "To go back into some of these older plants and deal with seismic issues might end up costing more than the plants are worth," said Stephen Maloney, a partner at Azoulas Risk Advisors in Boston, a consulting firm that works with the nuclear industry. That could force such plants to close. 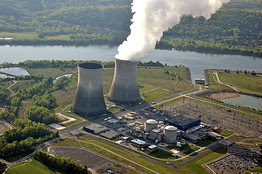 The seismic model could influence new seismic maps the U.S. Geological Survey is expected to issue next year, and could affect building codes and insurance rates.

The new model was jointly developed by the NRC, the U.S. Department of Energy and an industry-funded research group, the Electric Power Research Institute. The model incorporates information on about a thousand earthquakes that previously weren't cataloged. Those were determined through written records, geologic data, carbon dating and other methods. The research brings the total to nearly 3,300 quakes in the region since 1568.

The model shows increased hazards at many locations. For example, it indicates that the single worst earthquake likely to happen in a 10,000-year period in Chattanooga, Tenn., would be nearly twice as damaging to structures as previously calculated. Scientists found similar hazards at six other locations where they did spot checks: Houston; Manchester, N.H.; Jackson, Miss.; Topeka, Kan.; central Illinois; and Savannah, Ga.

Atlanta-based Southern Co. hopes to build two reactors in central Georgia, about 100 miles from Savannah. The company took the latest seismic information into account and believes the reactors will meet the standard of the new model, said B.L. "Pete" Ivey, a vice president. But Southern will need to run calculations for its existing reactors to see if they meet the standard, he said.

Because regulators worry about "low probability/high consequence" events like the one in Japan, much seismic research now is focused on the central and eastern U.S., an area once seen as less active geologically than the West. There are 96 reactors in the region, compared with just eight in the West.

Scientists, using computers, satellites and field data, now know there have been many huge earthquakes in the central and eastern regions of the country. And shock waves travel far in the East because the Earth's crust is more rigid there than in the West.

Write to Rebecca Smith at rebecca.smith@wsj.com