“Each licensee shall develop and implement guidance and strategies intended to maintain or restore core cooling, containment, and spent fuel pool cooling capabilities under the circumstances associated with loss of large areas of the plant due to explosions or fire ….”

The San Onofre spent fuel cooling fire protection plan in the event of a large fire and/or explosion hinges on the expertise and staffing of the on-sight San Onofre Fire Department.

Since the San Onofre Fire Department and Emergency Planning Personnel Staffing was reduced to a skeleton crew without prior approval from the NRC after a full and proper evaluation, the existing fire plan is now outdated and unrealistic in event of a large fire or explosion.

A Spent Fuel Pool Cooling Accident, in case of a large fire or explosion without adequate and demonstrated mitigation measures is a MAJOR Nuclear Safety Concern for all the millions of Southern Californians living within the 10 Mile Emergency Protection Zone.  Remember Fukushima's triple meltdowns occurred because of a failure to keep their reactors cool after the big earth quake and tsunami which occurred on 03/11/11.

Last Friday, the NRC cited SCE, the operator of San Onofre's nuclear power plant for violating NRC rules by failing to get approval before eliminating 39 emergency-response jobs after the plant closed last year.

Historically, NRC Region IV has had the habit of citing Southern California Edison with only low level violations, even if the violations were actually severe violations.  This cozy relationship was a contributing factor in the radioactive leak that resulted in the early decommissioning of San Onofre Units 2 & 3 and the loss of billions of dollars to SoCal ratepayers that could have been prevented, if the NRC had enforced the Federal Regulations as written.  This type of safety enforcement is not good for Californians or the NRC.  Now a serious review/investigation and proper action/fines are required by the NRC and its Commissioners, to assure Nuclear Safety is maintained at San Onofre and all the other US Nuclear Power Plants.

The question the NRC should ask is, "Knowing that the SPENT FUEL POOLS MUST STILL BE KEPT COOL 24/7 no matter what, if a major earth quake occurred tonight, would San Onofre Fire Dept.'s skeleton crew be able to guarantee US that they could prevent a nuclear accident from occurring, especially since the 39 emergency-response positions that were illegally eliminated, probably cost ratepayers much less than even one still employed highly paid nuclear manager who would be home sleeping?

The question that the CPUC should ask is, "If SEC is really interested in safety as they keep telling us, what is the reasonableness of continually cutting corners on those that actually insure our safety, while at the same time retaining other highly paid nuclear Staff?

The question that should be in every Californian's mind is, Just how many nuclear plants has So Cal Edison decommissioned, and what was the radiation rate of the site after they were done?

I would like to see So Cal Edison removed from any further work at San Onofre, replaced by a company with the best track record in the industry for safely returning a site to its former state. Whoever that may be, perhaps San Onofre should be placed on the EPA's superfund list due to the shear amount of radioactive waste found on site.

I do not want to see So Cal Edison spending a "small amount" of the decommissioning funds as they see fit as it stands now, in essence profiting on the mess they have left here in San Clemente, when they have proven time and time again that they can play fast and loose with the facts regarding this now decaying nuclear waste generating station.

I would like to see a Citizens oversight committee in charge of the purse strings related to the decommissioning project that as we all know will last many many years.

To this Citizens oversight committee I would ask

Posted by Darin R. McClure at 8:25 AM No comments:

To all who will help make California safe for our children's future, Public meeting of the new SCE CEP (Community Engagement Panel) about the decommissioning of SONGS will be Tuesday, March 25 from 6 to 9 p.m. . The meeting will be held at the San Clemente Community Center and people will have a 3 minute comment period at some point in this meeting.  San Clemente Community Center is located at 100 North Calle Seville, San Clemente, CA.
This is the start of a very important process for our community and all of Southern California. Please tell your friend and show up to this meeting if at all possible.

Just some of the issues we need talked about are at this meeting:

High burnup fuel at San Onofre
Waste storage at San Onofre
Dry Cask being storage in the safest way
If problem happens in the Cask what is SCE plan to mitigate this problem, if none exist then SCE needs to develop adequate strategies to detect and mitigate unexpected degradation during dry storage.
transportation casks for HBF does not exist

I will send another email with the latest document from Marvin Resnikoff and Donna Gilmore on High burnup fuel.

Sincerely,
Gene Stone
Residents Organized For a Safe Environment (ROSE)
Posted by We are all Part of the Earth at 9:51 AM No comments:

Public meeting of the new SCE CEP (Community Engagement Panel) will be Tuesday, March 25 from 6 to 9 p.m. . The meeting will be held at the San Clemente Community Center and people will have a 3 minute comment period at some point in this meeting.
This is the start of a very important process for our community and all of Southern California. Please tell your friend and show up to this meeting if at all possible.
San Clemente Community Center is located at 100 North Calle Seville, San Clemente, CA.

Posted by We are all Part of the Earth at 9:25 AM No comments:

Turn Off A Light For Fukushima

It's time to punish the electric utility companies in the only way that they understand, by taking money away from them. When so many people join this action that the utilities see a measurable drop in their revenue, they will think twice about all the money and resources they have spent keeping nuclear power alive. Join our action, and let us know what level of conservation you will be practising on March 11. Level 1 - Turn off extra lights and power; Level 2 - Severely cut back on electricity use; Level 3 - Use no utility power that day (Caution! requires careful planning!); or Level 4 - Use solar or wind power to put energy back into the grid.

When San Onofre's nuclear waste generating plant closed last summer, many breathed a sigh of relief. Yet San Onofre still requires a multi-decade 'decommissioning,' with radioactive fuel and components carted away to uncertain disposal, at further expense measured in hundreds of millions of dollars. Who profits and who pays is in dispute.


For additional information please contact the gallery or Mark Chamberlain at 949.697.5237

Posted by Darin R. McClure at 9:47 AM No comments:

We Shut Down San Onofre! Now Shut Down The Nuke In Your Backyard

As the Fukushima nuclear disaster deepens three years later into a planet-wide emergency, with massive continuous daily radioactive emissions into the air, ocean and biosphere, a new documentary from award-winning filmmakers counters nuclear industry lies and cover-ups. It looks at the people, organizations, strategies and factors that forced a powerful corporation to bend to the public will.It tells the little-known history of the Nuclear Free California Movement.Its an empowering story of activists, nuclear experts, public officials, whistleblowers, journalists and extraordinary citizens facing up to the threat of Fukushima fallout while working to prevent potential Fukushima-like catastrophes here at home.Its also a story of the growing solidarity between Japanese and US activists as they unite to challenge the global nuclear establishment.For more info: http://www.shutdowndoc.tv/ 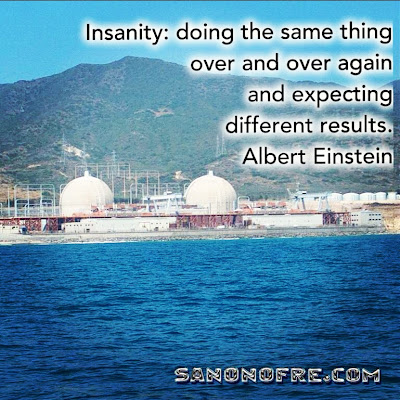 Posted by Darin R. McClure at 9:33 AM No comments: