We were giving an interview down in front of the nuclear power plant. The reporter was surprised that we could get so close to the plant and at how low the Tsunami Wall actually was. I told him we could take a walk for a closer look.  After reaching the midpoint we stopped and did some more interviewing and picture taking. There was an unusual turbulent release of water just 20 yards out into the ocean. I've never seen anything like that out of the many times I've been there. Then the loudspeakers came on announcing some kind of issue down at Gate 4. That is when we started feeling like maybe we should get out of there and sure enough, the next announcement was for us to leave and to stop taking pictures. That is the first time I've ever been acknowledged when down there, so I'm actually relieved to know someone is starting to pay more attention to unusual activities in front of the plant. When we arrived back at the cars we were met by the heavily armed security guard who insisted I stop filming because of the "S.I." equipment he was wearing. It would have been rather intimidating if he wasn't 70 years old. He took the reporters information and was actually quite nice. He happened to mention that there had been some kind of minor accident (or injury?) at the plant and with that bit of news we were happy to be on our way. So far, no news about what the security guard was referring to but I intend to find out if possible. 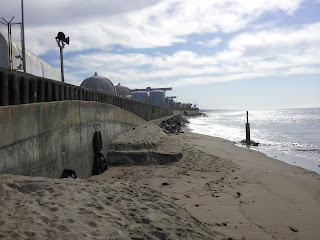