How Do We Still Have Power When San Onofre is not Operating (19 days and counting)?


I asked this question of a whistle blower who was a licensed nuclear operator at San Onofre and got the following explanation...

All providers of electricity from any source feed power into the Western United States Grid. The grid is managed and operated by the California Independent System Operator (CAISO) who directs power where it is needed. Power is constantly being pushed into the grid, circulating a margin of power that exceeds consumption, providing us with a constant buffer. Only that which is consumed gets metered and results in compensation to the provider.
Small scale providers using natural gas, hydro, wind and solar are in less demand because they are competing with nuclear power which has artificially lower expenses due to subsidies and other invisible burdens carried by society. Nuclear power must run at full capacity 24/7 because that is the nature of this technology. It can’t be dialed up or down to adjust to fluctuations in demand, so it just sits there churning out power regardless of how much actually gets used.
Now that our nuclear power source is in complete shutdown mode, the other sources of electricity are able to charge SCE a premium to meet their obligations. This is good business for the smaller independent providers, giving them a larger share of the market. While this may sound bad for the ratepayers who always get stuck with the bill, it demonstrates the financial exposure we face by relying on nuclear power, let alone the many other well known risks of using radiation to boil water. The fact is that the $640 million invested in each of the failing generators came out of our pockets, as will the expenses to repair or replace them (if we allow it).
We use nuclear power because it is available, not because we need it. We blindly accept the risk of a Fukushima scale disaster because we are led to believe we would have to endure blackouts and huge financial losses without it. The industry likes to claim that they provide Californians with 19% of our energy, but according to data (see attached) from the California Public Utility Commission (CPUC), there would still be a buffer of excess power available from other sources if we did not use nuclear power at all. Truly sustainable energy providers would enjoy financial stability leading to more rapid advances in technology getting us closer to energy independence and addressing climate change while creating jobs and a better economy.
It is time to demand that the CPUC steps in on behalf of ratepayers and put an end to this literal abuse of power. A small group of individuals reap the benefits of huge profits and undue influence at the expense of many. They will run these nuclear power plants until we force them to shutdown or allow them to meltdown. What more proof is required to understand that we don’t need them after having no nuclear power for 19 days and counting? Let’s move on to a cleaner, safer and more prosperous future.
Even if we had to be a little more careful about how we waste energy in order to avoid excessive demands on the grid during the summer we can definitely get by without nuclear power in California. Don't believe what the industry is telling us about the hardships it would create. 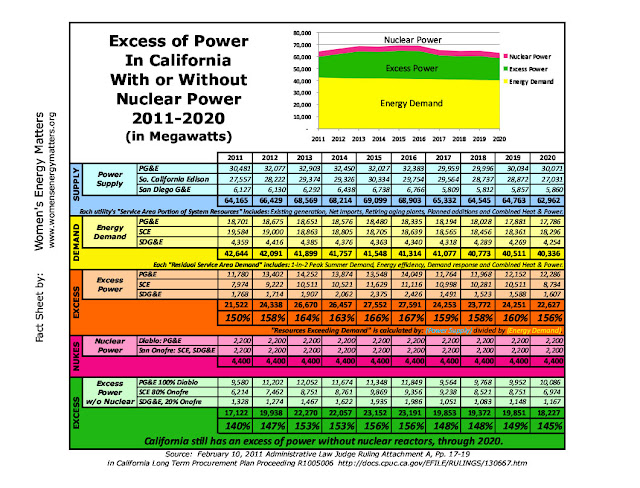 We are having “Fukushima Remembered” on 3/10 with guest speakers from Fukushima and a protest at the plant on 3/11, the first anniversary of the tragedy in Japan. Sign up here to be updated on our activities. We are counting on big numbers to offset the big money acting for profit above safety. Please share our message with others and make a donation if you can.  Thanks!