June 7 marks the first anniversary of Southern California Edison’s decision to permanently close the troubled San Onofre nuclear plant near San Clemente. Gene Stone of Residents Organized for a Safe Environment (ROSE) summed it up this way: “We are safer – but we are not yet safe.”
There are two crucial matters: the quality of storage technology on-site at San Onofre, and the prospects for long-term storage at a remote site.
The accuracy of Stone’s words was confirmed at a May 6 workshop on managing nuclear fuel waste. Tom Palmisano, senior nuclear officer for Edison, reported that cooling pools at San Onofre currently hold 2668 spent fuel assemblies including 1115 “high burn-up,” a fuel type that is hotter both thermally and radioactively than conventional fuel.
Spent fuel from Unit 1 is already in dry casks holding 24 assemblies each. Removal of Unit 2 and Unit 3 fuel from pools will require 100 more 32-unit casks. This will triple the footprint of the concrete storage structure, from today’s 200 x 400 feet to an ultimate 400 x 600 feet.
Experts are unanimous that fuel pool hazards are far greater than dry cask storage and the intent is to complete transfer in 5 to 7 years. At that point the focus shifts to long-term safety of casks.
A lively debate at the May 6 workshop pitted Marvin Resnikoff of Radioactive Waste Management Associates against Michael McMahon from cask manufacturer AREVA and Drew Barto, lead on spent fuel storage and transportation for the U.S. Nuclear Regulatory Commission (NRC).
Resnikoff reviewed the performance hazards and risks in cask safety for long-term on-site storage and off-site transport. McMahon and Barto countered with advances in design technology that they say provide a robust and secure storage system even for high burn-up fuel. Through this exchange of sharply differing views, the workshop added value by throwing the spotlight on key technical issues in specific ways that can be debated to a point of resolution. Nuclear safety advocates will be watching the outcome closely.
The other major contribution of the workshop was to confirm a striking degree of unanimity regarding the need to revitalize the process for locating and developing sites for long-term remote storage. Gains in on-site safety promised by technology advances did not diminish the consensus that spent fuel waste should be removed from San Onofre at the earlier possible opportunity.
In part this reflects the unusually exposed nature of the San Onofre site. But sentiment runs deeper. Per Peterson, a member of the NRC’s Blue Ribbon Commission, expressed a feeling little short of dismay at the national failure to identify and develop remote storage. Edison said it is committed to this outcome as the fully satisfactory solution. Members of the expert panel as well as the Citizens Engagement Panel (CEP) that hosted the event made it clear that indefinite on-site storage remains unacceptable.
Message to the NRC: San Onofre may be the test case where all parties are urging a better way than the grotesque and inappropriate land-use outcome of constructing a nuclear waste mausoleum at San Onofre or at any other closed nuclear plant.
Dr. David Victor of UC San Diego chairs the CEP, which organized the workshop. He summed up the discussion this way: “We have an obligation to make the long-term storage of fuel as safe as possible and practical. We need a strategy for federal action on consolidated storage and ultimate repositories. Toward that end, we should articulate what we as a community need—and carry through with the Governor and Congress to assure they give priority to what is most important.”
Enter Senator Barbara Boxer and colleagues Sanders and Markey. On May 16 they introduced Senate bills S. 2324, 2325 and 2326, which would:
• Require the NRC to cease its current practice of issuing exemptions to emergency response and security requirements for spent fuel at closed nuclear reactors, unless all fuel storage at the site is in dry casks.
• Ensure that host states and communities have a meaningful role in shaping decommissioning plans for retired nuclear plants.
• Require for the first time that the NRC to explicitly and publicly approve or reject each proposed decommissioning plan.
• Ensure operator compliance with the NRC requirement that spent nuclear fuel be removed from pools and placed into dry cask storage within 7 years after the decommissioning plan is submitted to the NRC.
• Provide funding to help reactor licensees implement plans for decommissioning nuclear plants.
• Expand the emergency planning zone for non-compliant reactor operators to 50 miles.
The Boxer-Sanders-Markey bills are classic legislative oversight. They close safety-related loopholes and provide a more accountable and participatory process for affected area residents.
These sensible steps do not in themselves deal with on-site storage design technology or remote site development. But they are in the spirit of comprehensive nuclear waste management, which remains one of America’s largest environmental challenges.
By Gleen Pascall
Sierra Club
Posted by We are all Part of the Earth at 9:13 AM No comments:

About a dozen non-essential employees have been evacuated from #SanOnofre as a precaution in response to a brush fire near #CampPendleton.
— SCE_SONGS (@SCE_SONGS) May 14, 2014

The above tweets were posted by the official twitter account for SONGS as the San Onofre Nuke Dump was being evacuated during our recent wildfires here in San Clemente.  In my discussions with other nearby San Clemente Residents, who are obviously not essential to running this now defunct nuclear waste generating station, we all agreed on one thing,

Who in their right mind would run a siren test during an actual emergency?


One is reminded of the childhood story and the lessons learned from "A Boy Who Cried Wolf" Have the people who run these tests never heard of this story? In a nutshell a boy The Boy Who Cried Wolf is one of Aesop's Fables, derived the English idiom "to cry wolf", meaning to give a false alarm. The fable concerns a shepherd boy who repeatedly tricks nearby villagers into thinking a wolf is attacking his flock. So when the time comes that the boy really was being eaten by a wolf, no one paid any attention.

Please Join Us Thursday Night To Express Your Dismay At This Alarming Lack Of Common Sense.

Southern California Edison plans to upgrade to NUHOMS® 32PTH2 dry cask system to store their highly radioactive nuclear waste.  This means storing 32 nuclear fuel assemblies in a space original designed for 24 fuel assemblies..  The higher number of fuel assemblies brings higher risk of radiation releases, especially for the hotter and more radioactive high burnup fuel. This is a brand new design that the NRC approved.  However, the NRC is accepting public comments until May 15, 2014.

Submit comments at this Federal Register link. Refer to Docket ID NRC-2013-0271 in any correspondence to the NRC about this.

The NRC should not lower safety standards by approving this new canister.

Posted by Darin R. McClure at 8:12 PM No comments:

Safe and Secure Decommissioning Act of 2014

When spent nuclear fuel is removed from the part of the reactor that generates electricity, it continues to produce significant quantities of heat and radiation for years. Spent nuclear fuel is too dangerous to be removed from the spent fuel pools for 5-7 years. Studies conducted by the National Academy of Sciences, Nuclear Regulatory Commission (NRC) and independent experts have shown that partial draining of the water from a spent fuel pool caused by an accident or terrorist attack could result in a spontaneous fire, the release of large quantities of radiation, and widespread contamination. However, NRC regulations allow spent fuel to remain stored in spent fuel pools until the reactor completes decommissioning, which can take as long as 60 years. Current NRC regulations also allow the NRC and the nuclear plant operator to adopt a decommissioning plan without considering the concerns of nearby states and communities. The three bills introduced today will solve all of these problems.

Senator Boxer said: “ In my home state of California, the San Onofre nuclear plant has closed permanently, and this legislation will help guarantee that this facility, and others like it, are safely decommissioned and are no longer a liability for local communities."

Senator Sanders said: “Every state with a nuclear power plant has a strong interest in how that plant is decommissioned. This is about making sure that states and local communities can play a meaningful role in a decision that has enormous economic, environmental, and community impacts.”

Senator Markey said: “Experts agree that a spent fuel pool accident could have consequences that are every bit as bad as an accident at an operating reactor. In Massachusetts, Pilgrim nuclear plant’s spent fuel pool contains nearly four times more radioactive waste than it was originally designed to hold. Nuclear waste must be moved to safer storage now before the next nuclear disaster occurs.”

Safe and Secure Decommissioning Act of 2014 (Boxer, Sanders, Markey)
The Safe and Secure Decommissioning Act of 2014 would prohibit the Nuclear Regulatory Commission (NRC) from issuing exemptions from its emergency response or security requirements for spent fuel stored at nuclear reactors that have permanently shut down until all of the spent nuclear fuel stored at the site has been moved into dry casks, which are a more secure and safe option for storage. NRC has determined that earthquakes would be the most likely cause of a spent fuel pool failure that could result in a spontaneous fire, the release of large quantities of radiation, and widespread contamination, but has granted every request from emergency response requirements that it has ever received from a licensee of a decommissioning reactor.

Dry Cask Storage Act of 2014 (Markey, Boxer, Sanders)
The Dry Cask Storage Act of 2014 would ensure that every nuclear reactor operator complies with an NRC-approved plan that would require the safe removal of spent nuclear fuel from the spent fuel pools and place that spent fuel into dry cask storage within 7 years of the time the plan is submitted to the NRC. The legislation also provides funding to help reactor licensees implement the plans and expands the emergency planning zone for non-compliant reactor operators to 50 miles.

Posted by Darin R. McClure at 1:03 PM No comments: 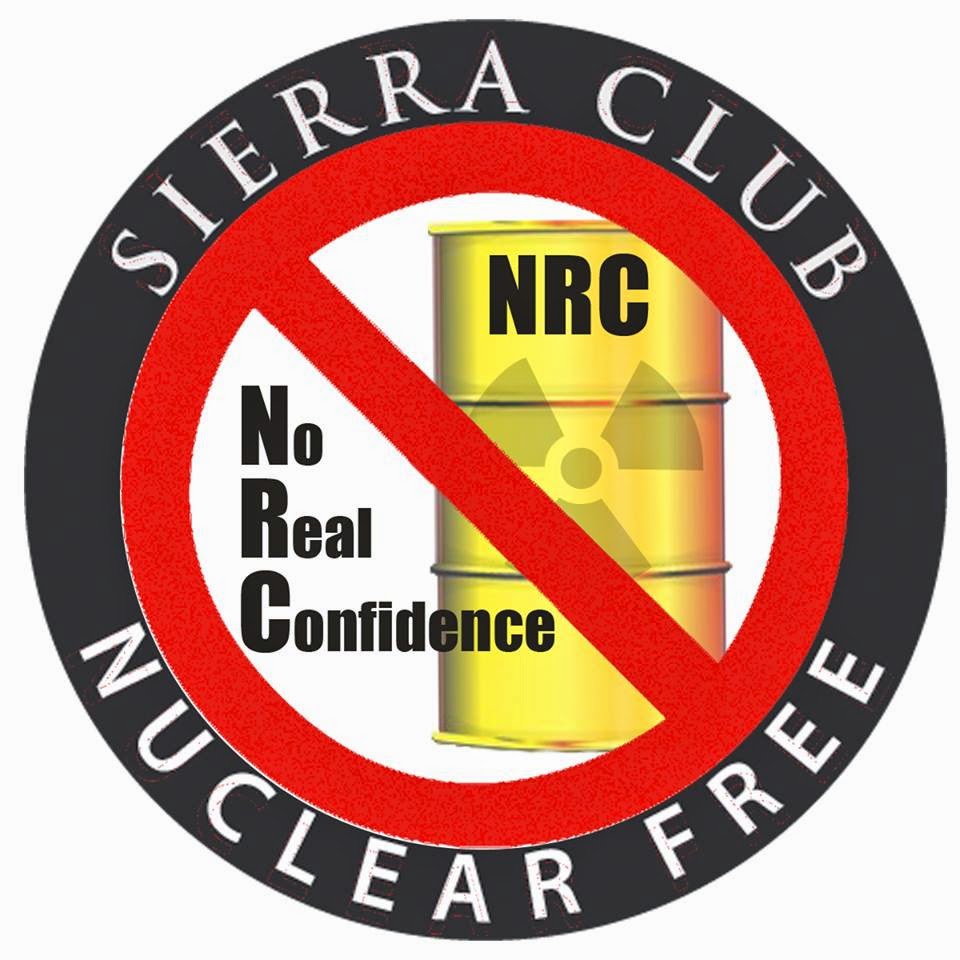 Posted by We are all Part of the Earth at 2:18 PM No comments: