THE POWER TO CHANGE

“If the ideas that rule our culture are stopping us from saving ourselves, then it is within our power to change those ideas.”  Naomi Klein

We humans are adept at fighting for what we are against.  Can we fight as hard for what we are for?  Socrates reminds us “The secret of change is to focus all of your energy not on fighting the old, but on building the new.”
Many people, including ninety seven percent of climate scientists, agree that climate warming trends over the past century are very likely due to human activities.  Some of the results of global warming, according to “Global Climate Change: Vital Signs of the Planet” are: global sea levels are rising, the Greenland and Antarctic ice sheets have decreased in mass and the thickness of the Arctic Sea ice has declined rapidly over the last several decades. Glaciers are retreating almost everywhere around the world.  The amount of carbon dioxide absorbed in the upper layer of the oceans is increasing by approximately 2 billion tons per year.  James Hansen, adjunct professor of the Department of Earth and Environmental Sciences at Columbia University, believes that carbon pollution is set to end the era of stable climate. 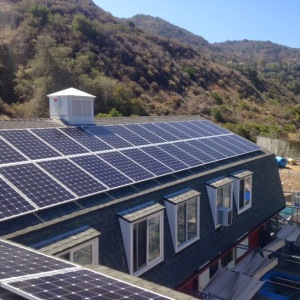 Solar for Seals project 2014
With these facts pointing to the devastation of life on Earth as we know it, what actions are we willing to take to assure the continuation of life on our beautiful planet?  We must join together now to do what we can do to make the necessary changes to reverse these trends.  Human beings have the capacity to learn and adapt quickly.  We are able to change old thinking and patterns of behavior and create change in positive ways.  There are political and economic forces that sometimes stand in the way of progress, but we do not have to allow these forces to prevent us from doing what we must.  Many individuals are moving forward with ideas to save our planet and creating supportive communities to make effective change.
One of the ways to avert this climate change crisis is to decrease our reliance on fossil fuels.  To this end, it is possible to switch to renewable energy.  People all over the world are creating wind farms, working with tidal power, wave power, solar power, hydroelectricity, and geothermal power.  Our organization, Residents Organized for a Safe Environment (ROSE) and Planet Earth Solar (PES) of San Clemente, CA. have successfully completed two solar projects: Oso Lake Boy Scout Camp Solar project, 2013 and the Pacific Marine Mammal Center Laguna Beach “Solar for Seals”, 2014.  ROSE and PES are currently working on a third solar project, “Solar for Non Profits” project for 2015.  We are committed to bringing people together in a community effort to provide solar power to non -profit organizations.  These organizations are already helping our social and environmental communities in various ways.  By assisting them with conversion to solar power, this adds another layer of depth to their commitment to bettering our world.
Residents Organized for a Safe Environment (ROSE) and Planet Earth Solar (PES) have selected The Center for Spiritual Living Capistrano Valley (CSLCV) in San Clemente, CA. for our 3rd Solar Project 2015.  A 60 kW system consisting of 197 solar panels to provide clean, sustainable and environmentally safe energy will be built for the Center’s facility. As PES and ROSE and CSLCV donate our time and labor for this project, please join us in taking this environmental action as a citizen of the world. Be a part of the solution for our world’s clean and renewable energy future by donating today. The total cost of this project will be $135,000.00. The money the Center saves on energy costs will go to community projects. Your donation to this solar project will be greatly appreciated.
To help us, please use our Razoo fundraising site at:  https://www.razoo.com/story/Center-For-Spiritual-Living-Capistrano-Valley for your “tax deductible” donation.
“We are all flowers in the Great Spirit’s garden. We share a common root, and the root is Mother Earth.” Hopi Prophecy

It will take all of us working together now if we are to make a positive change for future generations.
Love, Gene and Joyce
Posted by We are all Part of the Earth at 12:54 PM No comments:

Thinking back, we have not forgotten your kind help with our 2014 “Solar for Seals”

project for Pacific Marine Mammal Center of Laguna Beach where we put 87 solar panels on their small roof.  It went so well we looked for a much bigger roof for 2015, and we found it.
We are happy to announce that Residents Organized for a Safe Environment (ROSE) and Planet Earth Solar has selected The Center for Spiritual Living Capistrano Valley (CSLCV) in San Clemente, CA. for our 3rd Solar Project 2015.  A 60 kW system consisting of 197 solar panels to provide clean, sustainable and environmentally safe energy will be built for the Center’s facility. As Planet Earth Solar and ROSE and CSLCV donate our time and labor for this project, please join us in taking this environmental action as a citizen of the world. Be a part of the solution for our world’s clean and renewable energy future by donating today. The total cost of this project will be $135,000.00, saving the Center over $150,000.00 over other bids. You may donate to this Solar project in one of two ways.
1. Make your “tax deductible” check payable to “Center for Spiritual Living Capistrano Valley” please mail check to Gene Stone 1203 Via Presa San Clemente 92672, so I can make sure to get your check into the Solar account at the center. Please note in the bottom left memo area of your check “Rose Solar project.” The check payment method will insure that 100% of your donation will go to the solar project, using the fundraising site we will lose 5% of your donation to Razoo.
2. Or use our Razoo funding raising site at for you “tax deductible” donation:
https://www.razoo.com/story/Center-For-Spiritual-Living-Capistrano-Valley
The Center’s Environmental statement:
“The Centers for Spiritual Living are committed to our vision of a world that works for everyone– a world in which resources are valued, cared for, and grown, and where there is generous and continuous sharing of these resources. A big part of that world is sustainable safe energy. At the Center for Spiritual Living Capistrano Valley in San Clemente California, we are contributing to this vision by installing a solar system to provide clean, sustainable and environmentally safe energy for our Center’s facility. We know that other spiritually minded people and organizations will want join us in taking this action for the betterment of all future generations. Not only will this new solar energy system provide our Center with safe sustainable energy, the cost savings recognized by lower energy bills will allow the Center to pursue numerous projects that will benefit our community.”
P.S. Please remember that it was this Center in San Clemente that gave ROSE such a great deal and made it so easy to do the Nuclear Symposium in October 2013.  They are willing and excited to help us with future events. We could not have done it with them.
The Center for Spiritual Living Capistrano Valley in San Clemente California, Planet Earth Solar and Residents Organized for a Safe Environment (ROSE) thank you for your kind and generous donation towards our solar project.
With your action today, you join us in being part of a clean energy future and take a step towards helping manage climate change.  You are now part of the growing number of people around the world who are “being” the change. We are honored and happy to walk down this path with you.
Sincerely,
Gene Stone
Residents Organized For a Safe Environment (ROSE)
Posted by We are all Part of the Earth at 9:24 AM No comments: