Will the NRC give SCE what it wants, permission to restart unit 2? 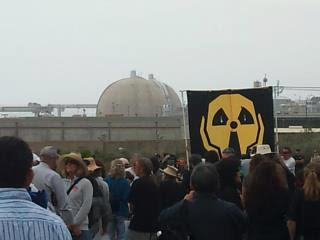 Will the NRC give SCE what it wants, permission to restart?
A PUBLIC MEETING NOTICE: San Onofre Nuclear Generating Station DOCKET: 05000361/362 November 16th, 2012 6:00 p.m. – 9:00 p.m. (PDT) LOCATION: Doubletree Guest Suites, Doheny Beach, CA 34402 Pacific Coast Highway Dana Point, CA 92629.
The 8.4 million citizens in the 50 radius of San Onofre should be very worried about the Southern California Edison's plan to restart unit number two at SONGS. SCE will explain in detail their plan of action to restart unit #2 at this meeting. For your information and safety please attend this meeting. Will the NRC give SCE want it wants, which is permission for them to restart without making any repairs to unit #2, with only the addition of a sound listening device to hear if there is a new steam leak?
The NRC has not replied to the public demand for an adjudicated public hearing that was clearly heard and understood by Mr. Collins at the last NRC meeting on San Onofre on October 9, 2012. How long will the public have to wait for an answer? Time is running out, and the NRC's credibility is once again in question. Just what are the NRC alliances? Why is there such a rush to restart this defective steam generator?
Will the NRC ever respond to the questions submitted by David Lochbaum of the Union of Concerned Scientists?  These question where:
Union of Concerned Scientists has serious concerns about Southern California Edison’s (SCE) restart plans for San Onofre Unit 2. In a 10/12/2012 letter submitted to the Nuclear Regulatory Commission (NRC), David Lochbaum, Director, Nuclear Safety Project, identified the following issues:
1.      Unit 2 replacement steam generator 2SG89 has significantly more wear indications per number of supports than does [Unit 2] replacement steam generator 2SG88. Until the reason for this marked difference between the wear degradation for the Unit 2 replacement steam generators is understood, the operational assessment performed for future operation is suspect. [See graph in Lochbaum letter].
2.      Since all four replacement steam generators came from the same manufacturer, were of the same design, made of the same materials, assembled using the same procedures, and operated under nearly identical conditions in twin reactors, the reason for this marked difference is unclear… [the] explanation is not well documented and therefore appears to be more convenient than factual.
3.      The document states that the owner will “administratively limit Unit 2 to 70% reactor power prior to a mid-cycle” outage to inspect the replacement steam generators. What are the legal consequences if the reactor power were to increase to 75%, 85% or 100% power? The NRC has licensed San Onofre Unit 2 to operate at 100% power. What would legally prevent the owner from restarting Unit 2 and increasing its output to the NRC licensed limit? The NRC’s enforcement program includes sanctions when its regulations are violated, but nothing for broken promises. If the NRC agrees that reactor operation at less than 100 percent power is warranted, it should enforce that reduction with an order or comparable legally-enforceable document.
4.      Table 8-1 of Enclosure 2 and its accompanying text attempt to explain how operating Unit 2 at 70% power will prevent the tube-to-tube wear (TTW) experienced on Unit 3 by comparing it to an anonymous reactor (called Plant A). ..reliance on one suspect data point (Plant A) is hardly solid justification for operation and 70% power being acceptable.
5.      There is no justification in this 80-plus page document for an operating duration of 150 days.
6.      … there are no legal means compelling the plant’s owner to shut down Unit 2 after 150 days of operation at or above 15% power.
7.      ...a temporary nitrogen-16 radiation detection system will be installed prior to the Unit 2 startup. However, there is no commitment to use it after startup, or to keep it in service should it stop functioning. The detection system is proposed as a defense-in-depth measure, but there is no assurance it will be operated.
8.      Attachment 6 to Enclosure 2 has proprietary information redacted. Section 1.4 of Enclosure 2 states that the owner used AREVA, Westinghouse Electric Company LLC, and Intertek/APTECH to review the operational assessment. At least one of these companies manufactures replacement steam generators and would therefore be a competitor to Mitsubishi Heavy Industries (MHI), which made the replacement steam generators for San Onofre. If the owner did not withhold the proprietary information from MHI’s competitors, why withhold it at all? If SCE did withhold the proprietary information from these reviewers, what is the value of their independent, but limited, review?
The question has to be asked should the restart be put on hold until the Academy of Science cancer study is completed, and should real time radiation monitoring be put in place on NRC's or SCE's website prior to a restart? The public needs to see for themselves what is being released when this defective steam generator blows again.
It is clear to ROSE that the rush to restart unit two is on, and the decision by the NRC to let SCE move forward has been made at the highest levels of the NRC.
One last question remains will you stand up for the public’s right to know and for the safety our children deserve?
Gene Stone, ROSE
http://residentsorganizedforasafeenvironment.wordpress.com/