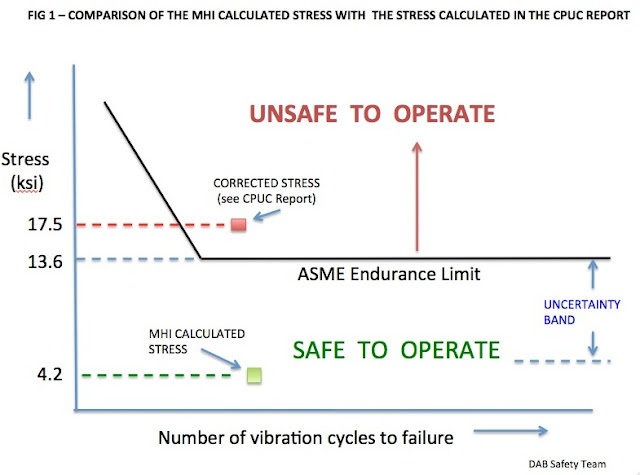 Provided to the “DAB Safety Team” as additional explanation of the fatigue damage to SONGS steam generators which was discussed in a report by the author and was submitted to the California Public Utility Commission on March 29, 2013

Note: Links to these documents are listed below

SCE/MHI made a mistake in their stress analysis, which directly impacts the safety of restarting Unit 2.  When the error is corrected, the result clearly shows that Unit 2 has already used up its allowed fatigue life and is not fit for service any longer.  This means that if Unit 2 is restarted at any power level an abrupt pressure change such as inadvertent closing or opening of a valve or a steam line break could lead to a sudden tube ruptures.   The ASME code and NRC regulations do not permit safety components to operate when their fatigue life has been exhausted.

The source of MHI’s error resulted from how they calculated the increase in the local stress at geometrical discontinuities  (notches), which are formed when two metal surfaces come in contact during vibration.  Since the worn surfaces of the tubes inside the steam generators cannot be seen, MHI made two key assumptions, which are inconsistent with the observation that both the tube and the supporting bar are worn into each other.  First, MHI assumed that the ASME endurance limit could be applied directly to the notched tube surfaces.  Since it is commonly known that surface roughness significantly reduces fatigue life and since the ASME data is for smooth polished surfaces, this assumption would underestimate the amount of fatigue damage.  Second, when using the Peterson chart, MHI assumed unrealistically large fillet radius and consequently derived a low concentration stress factor.  Large radii would decrease the local stress and cause the tube to fail at a higher stress thereby increasing its fatigue life.  Only by using these two, arbitrary non-conservative, assumptions was MHI able to conclude that Unit 2 did not suffer any fatigue damage.

As depicted in the MHI drawings the support bar and the tube form a sharp discontinuity at the contacting surface, therefore the appropriate geometry for calculating the stress concentration is an abrupt geometry change (very small radii), not a large radius shoulder fillet that was assumed by MHI.  When a correction is made to account for the sharp notch, the corrected stress indicates  (see Figure 1 below) that the tubes have used up their fatigue life during the first cycle of operation.  Structures with sharp notches can fail catastrophically when subjected to high cycle vibrations.  (MHI redacted their assumption so the exact value of the radius they used is unknown.)

The loss of fatigue life is a major defect in the tube material; NRC regulations 10CFR50, Appendix B, Criterion 16 specify that for a licensee to maintain his operating license, such non-conformance must be promptly identified and corrected.   The licensee must assure that “corrective action (is) taken to preclude repetition.  NRC’s General Design Criteria 4 and 10CFR50 Appendix A also specify that steam generator tubes must be able to “ accommodate the effects of loss of coolant accidents “ The fact that the NRC has not already raised these issues in any of their  “Requests for Additional Information, RAIs” indicates that the NRC would be ignoring its own regulations if it allows SCE to restart Unit 2.

In Summary: The SCE request for approval to operate Unit 2 at 70 % power for 150 days provided no explanation for the selection of this inspection interval.  The absence of such explanation and the absence of an indication of the actions that would follow demonstrate the unreliability of SCE entire assessment of restarting Unit 2.  Edison did not specify pass/fail criteria for the tubes during the outage inspection.  Given the fact that fatigue damage does not lend itself to detection, SCE request is unacceptable and should be rejected.