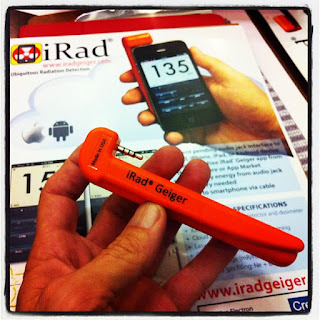 Hundreds of millions of smartphones have been sold worldwide. Radiation detectors and dosimeters that leverage the network capabilities of smartphones to measure and share radiological data have recently been launched in the market. In this paper we will analyze how crowd inspection – the collective measurement and sharing of radiological data by the general public – will potentially change emergency planning and response. The Fukushima Daiichi nuclear reactor tragedy in Japan spearheaded the acquisition of thousands radiation detectors and dosimeters by the general public. The perceived lack of communication from the Japanese government on the radiation levels in the country soon after the earthquake and tsunami that rendered the nuclear power station inoperable on March 11, 2011 led the general public to take their own radiation measurements. Initially, social media services were used to disseminate radiation levels in Japan. Just a few weeks after the disaster the first integration sites were created to collect and share measurements from individual radiation detectors. The second generation of fully networked and integrated radiation detectors have been introduced to the market recently. These devices allow users to seamlessly measure and share information using a smartphone or tablet. As the adoption of these devices increases, it is necessary to revisit emergency planning and response. These points must be taken in consideration.

First, the public must be educated on the correct use and interpretation of the results from these devices. Background radiation and seasonal variations must be carefully explained to avoid unnecessary confusion.

Second, emergency response plans have to be communicated with the general public.

For example, the San Onofre Nuclear Generating Station (SONGS) is located in a highly populated area in southern California. With almost 9,000,000 people living in a 50 miles radius from SONGS, it is important for authorities to have mitigation strategies to avoid mass chaos in case of an improbable radiological event. The concern is to have the public knowing about higher levels of radiation before authorities have a chance to plan a response. Conversely, crowd inspection can be used as a powerful instrument to help minimize the fears and concerns of the public residing near nuclear generating stations. The ability to measure and share actual radiation levels will minimize the impact that news reports have on every small incident that happens inside a nuclear power plant.

How will crowd inspection change the way we plan and respond to radiological emergencies?