Governor Jerry Brown
C/O State Capitol, Suite 1173
Sacramento, CA 95814
Dear Governor Brown,
We are looking for your support to keep California’s two nuclear power plants SHUTDOWN FOR GOOD.  Here are just a few reasons why:
1.      SAFETY FOR CITIZENS BEFORE PROFITS FOR POWER COMPANIES.
2.      The problem with the steam generators at San Onofre were caused by Southern California Edison’s upgrades (NOT LIKE FOR LIKE) with the increase of 400 tubes to increase profits, which in turn has put over 8.4 million people at a much greater risk of a NUCLEAR DISASTER in the 50 mile radius.  This will severely damage the world’s eighth largest economy, California.
3.      These two plants could not be built under today’s rules and guidelines for earthquakes and tsunamis, and the NRC will not force the power companies to meet the standards of today; yet they will overlook and easily relicense them.
4.      Evacuation plans are totally ineffective if a nuclear disaster occurs in conjunction with a severe earthquake.
5.      This week California's people and the state's vibrant economy were fortunate enough to live in a state with not one operating nuclear reactor. Both San Onofre and Diablo Canyon were shut down. The lights stayed on. Together with energy efficiency and an almost unlimited renewable energy potential in California, the State can become a world leader in energy for the 21st century; while at the same time achieving the essential reduction in carbon emissions. California will fail to meet this truly sustainable future while it continues to operate nuclear power. This week because of the nuclear crisis at San Onofre and the intervention of jellyfish at Diablo Canyon, California saw the future; and it is a future we demand. KEEP CALIFORNIA’S NUCLEAR POWER PLANTS CLOSED. 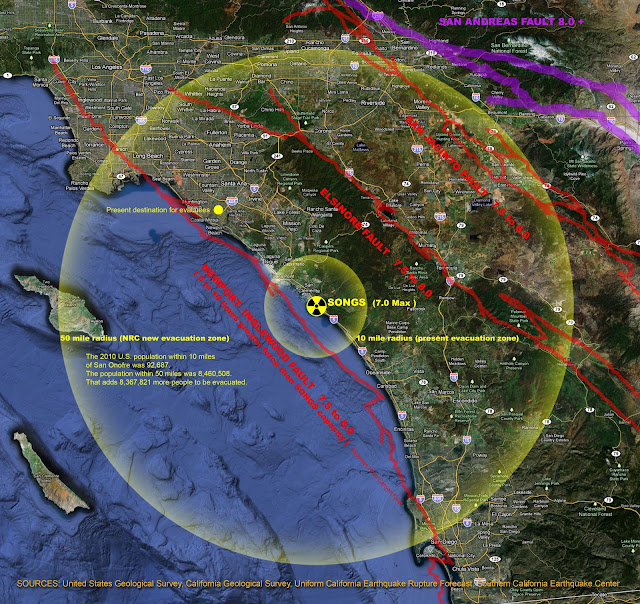