San Onofre, my local nuclear reactor, is completely shut down right now (like all but one reactor in Japan) and may never reopen. Why not? Because the steam generator tubes (made in Japan, by the way) clang into each other. Why does that happen? Apparently because the plant tried to increase the power output of the reactor by adding nearly 400 extra tubes when they ordered a "like-for-like" replacement of the original (four) steam generators, which were supposed to last the entire lives of the (two) reactors.

The original steam generators didn't last because they ran 'em too hot, I suspect. A couple of years ago they realized that as soon as the tubes wear out, they can replace them with steam generators that have more tubes inside but still fit in the same locations. (Or thought they could.) So they upped the power output of the reactor, which caused the tubes to fail more quickly than the normal life of the reactor -- but they didn't care. They knew our California Public Utilities Commission would stick the ratepayers with the cost of the replacement steam generators when the time came -- and they did. SanO's owners wanted to avoid having the steam generator replacement happen at the same time as the much more risky license renewal because there's ALWAYS a lot of opposition to that.

San Onofre's owners got through several steps of this process. The Nuclear Regulatory Commission saw it as a "like for like" replacement even though it wasn't, the ratepayers were charged with the costs of replacement, it happened years before license renewal, and best of all (from the utility's point of view), the utility ALSO made billions of extra dollars while they ran the reactors at extra-high power, pressure, and temperature, blowing out the gaskets, seals, and tubes! 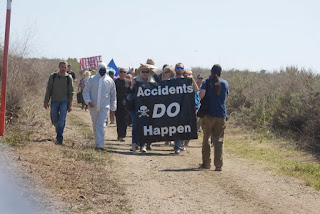